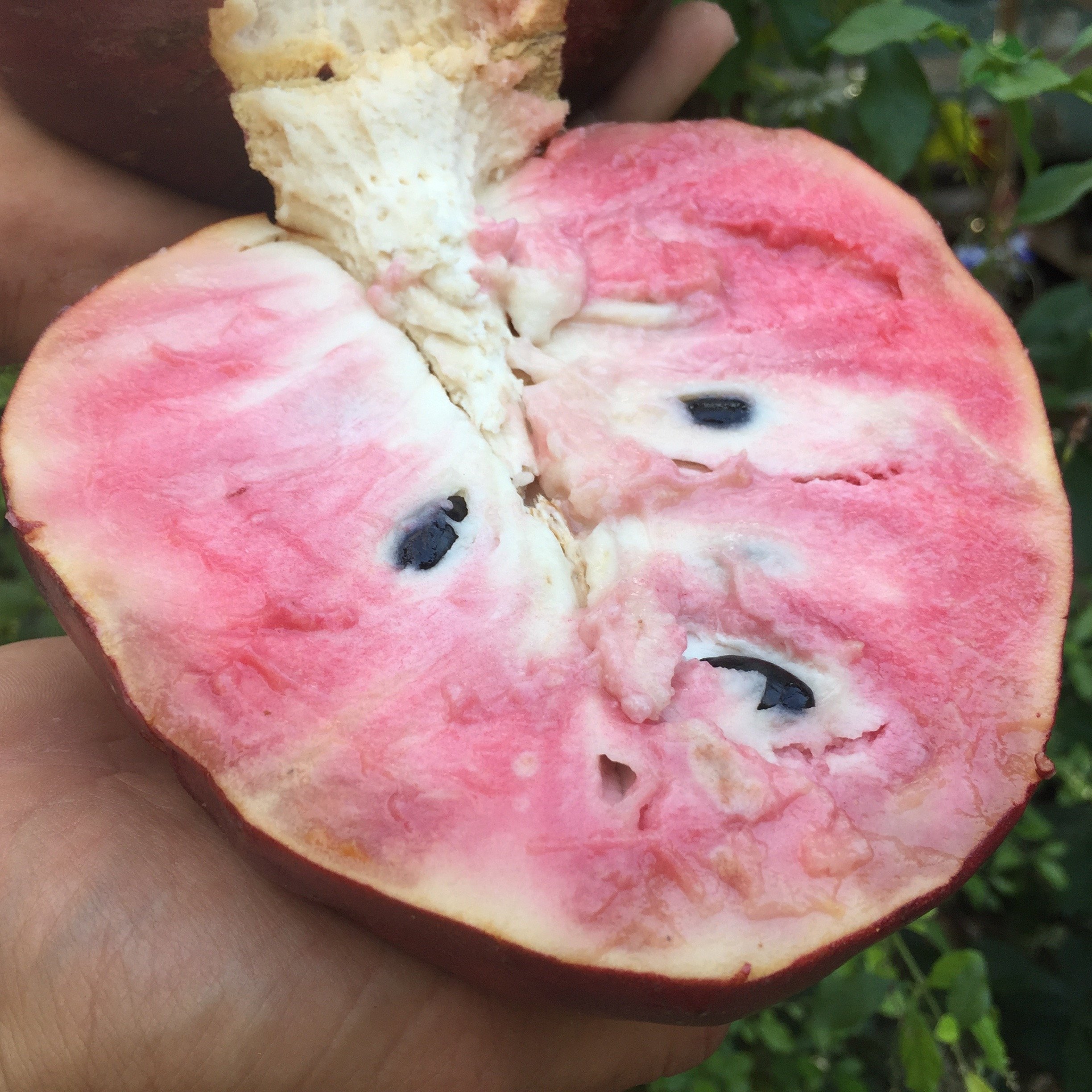 Custard apple is now in season! It tastes a lot like a cherimoya, but has a slight raspberry flavor that adds to its charmingness. 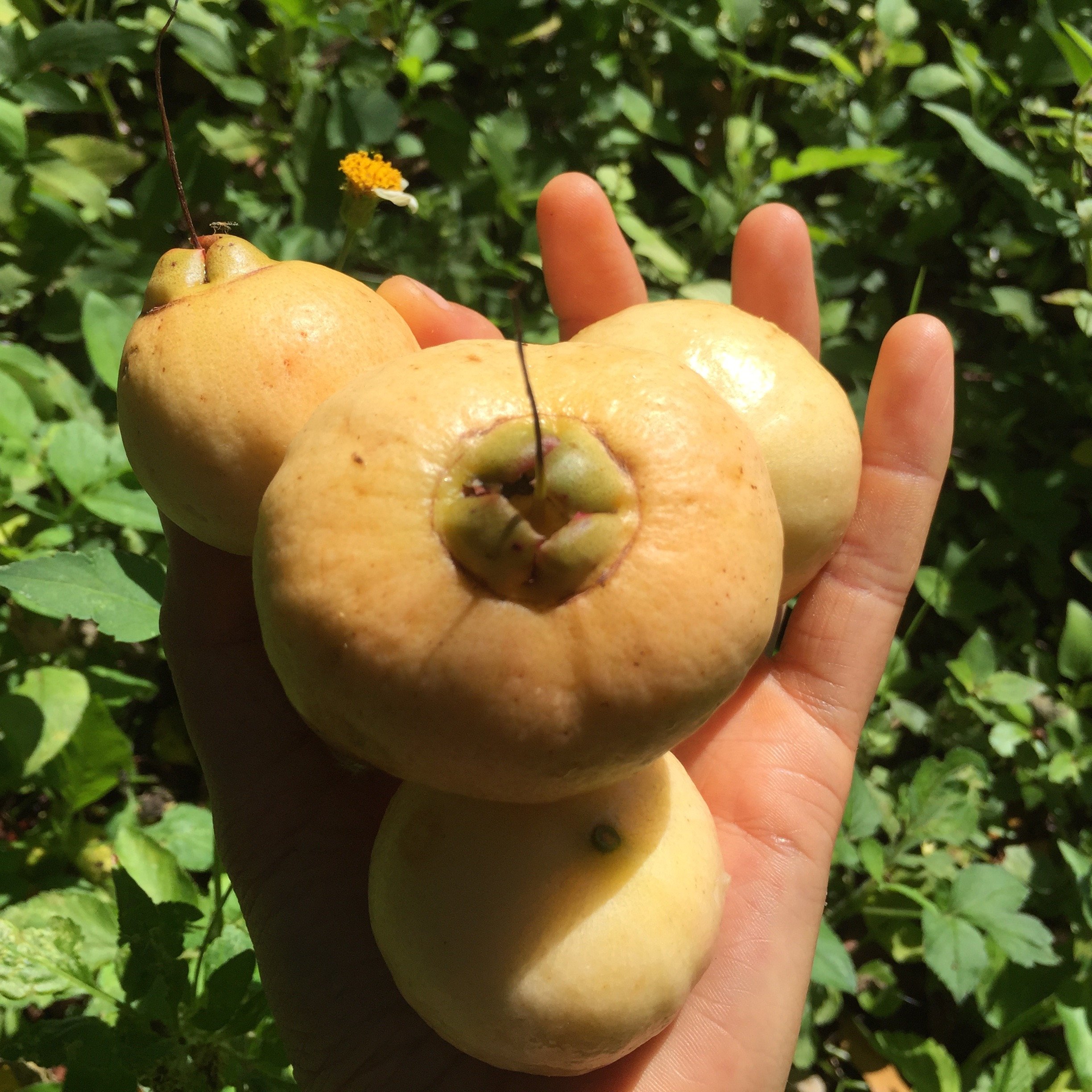 Take a look at a new rare fruit in season called ROSE APPLE. It is in the wax jambu/wax apple family: it is very fragrant and sweet like candy! You eat the outer shell and plant the seed inside. If you ordered a variety box last week you may get one in your box this week. Eat ASAP because they don't last long after picked 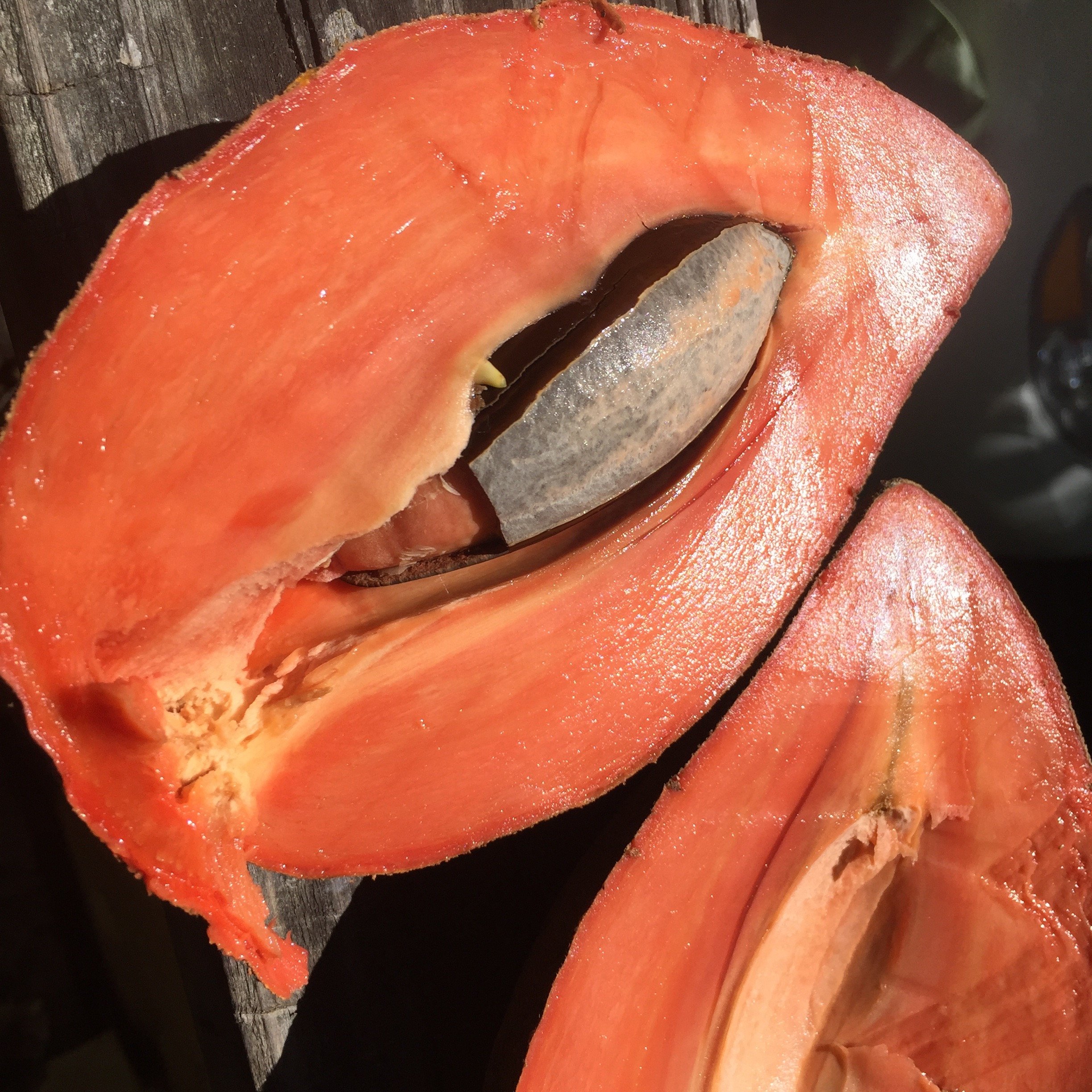 This Mamey Sapote is so creamy and delicious. We like it best chilled from the fridge or blended into a smoothie or vegan milkshake! 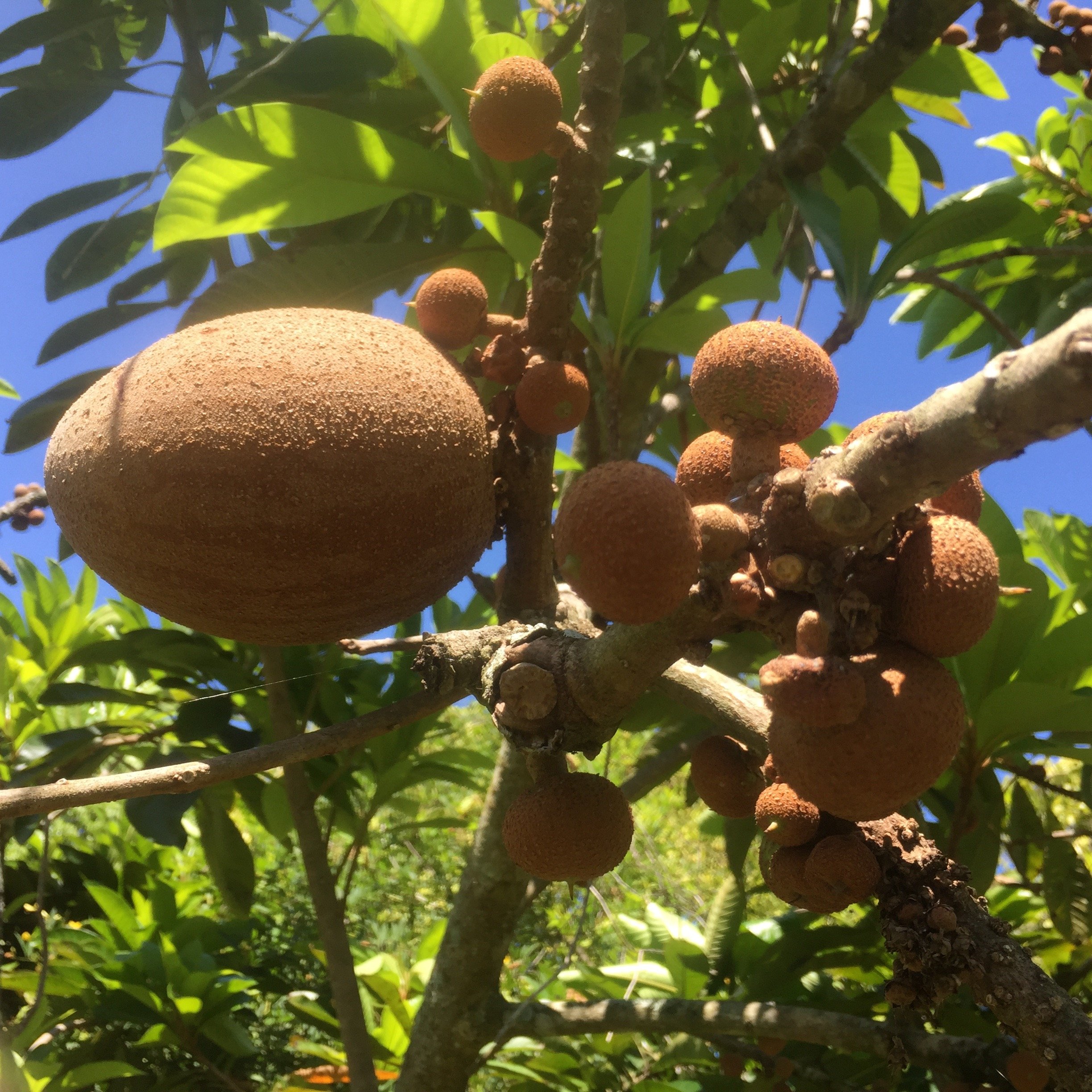 The Key West mamey sapotes are making their way in to fruition for the late summer/fall season. 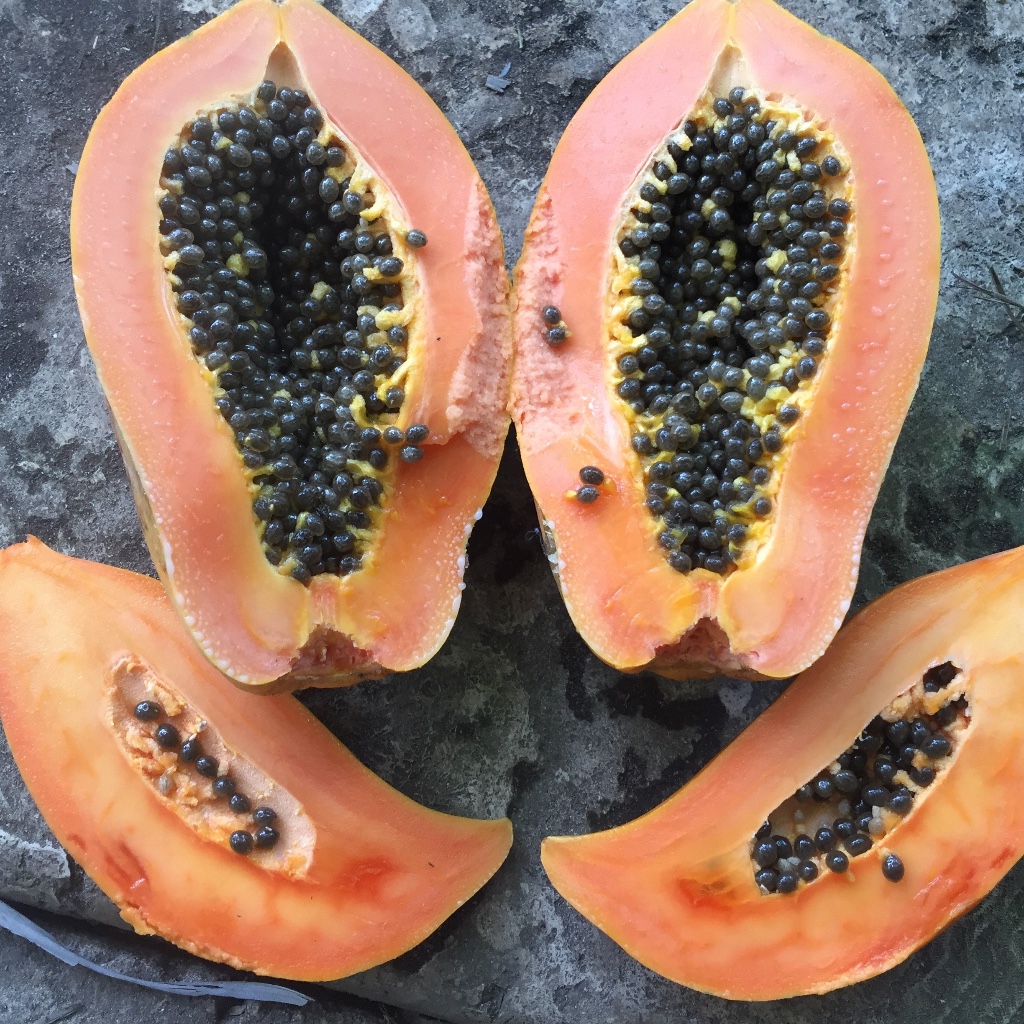 We have been enjoying papayas a lot lately. These won't be available in the summer, so now is a good time to order. 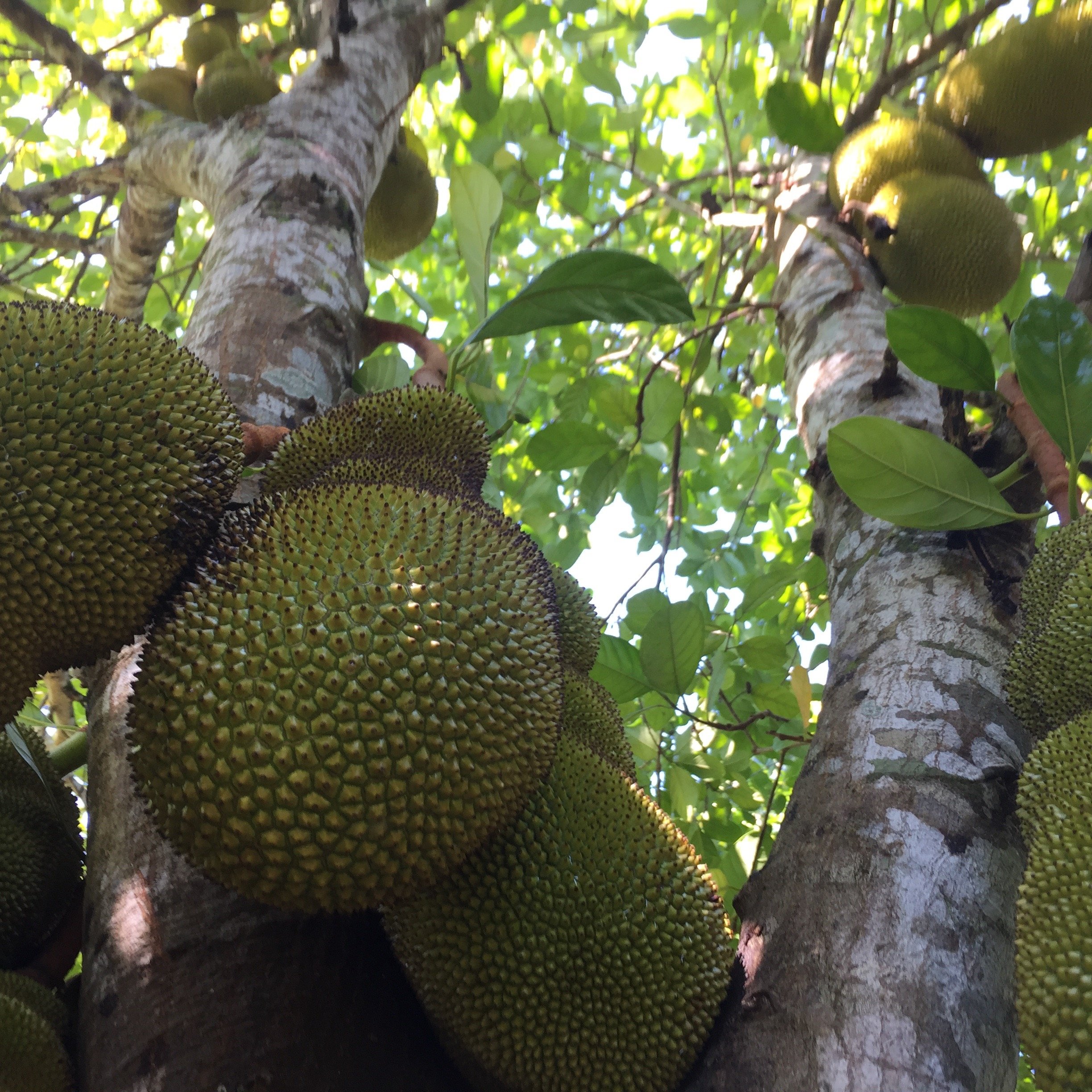 Loads of jackfruits are coming in! Everyone in Miami is super exited about these. The flavor is much sweeter than the ones imported from Mexico. These are picked tree ripened. There are a few indicators to tell when a jackfruit is ready to pick. First, the spikes must be at least half way darker (more tan) than the green part. We also make a small slice in the stem to examine the sap. If it is more watery than thick, then it is ready to pick! 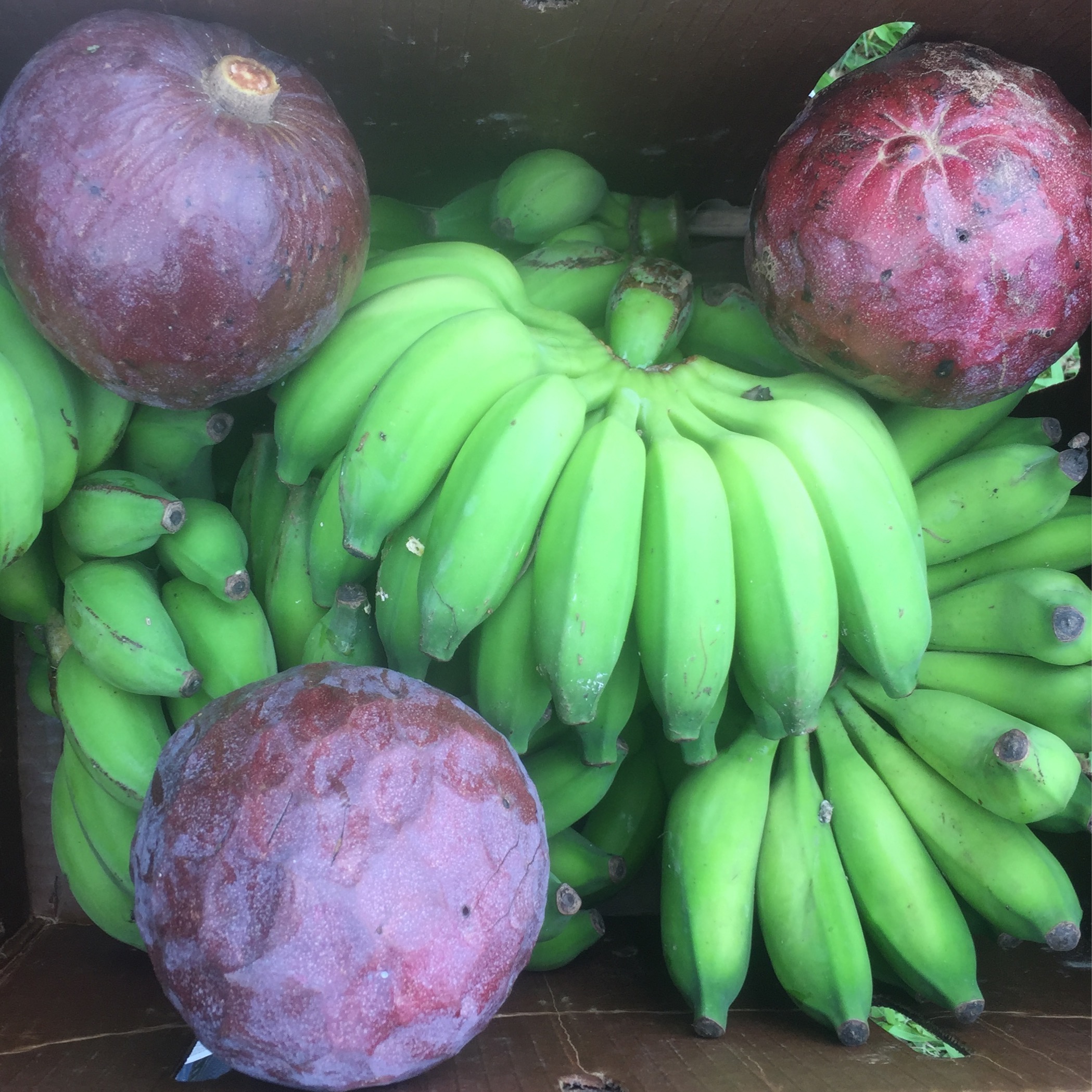 We only harvested one variety of bananas this week called mysore. It's a very lovely apple flavored banana that was included in the variety boxes. We are going to send the banana variety boxes next week so you guys can enjoy more variety. 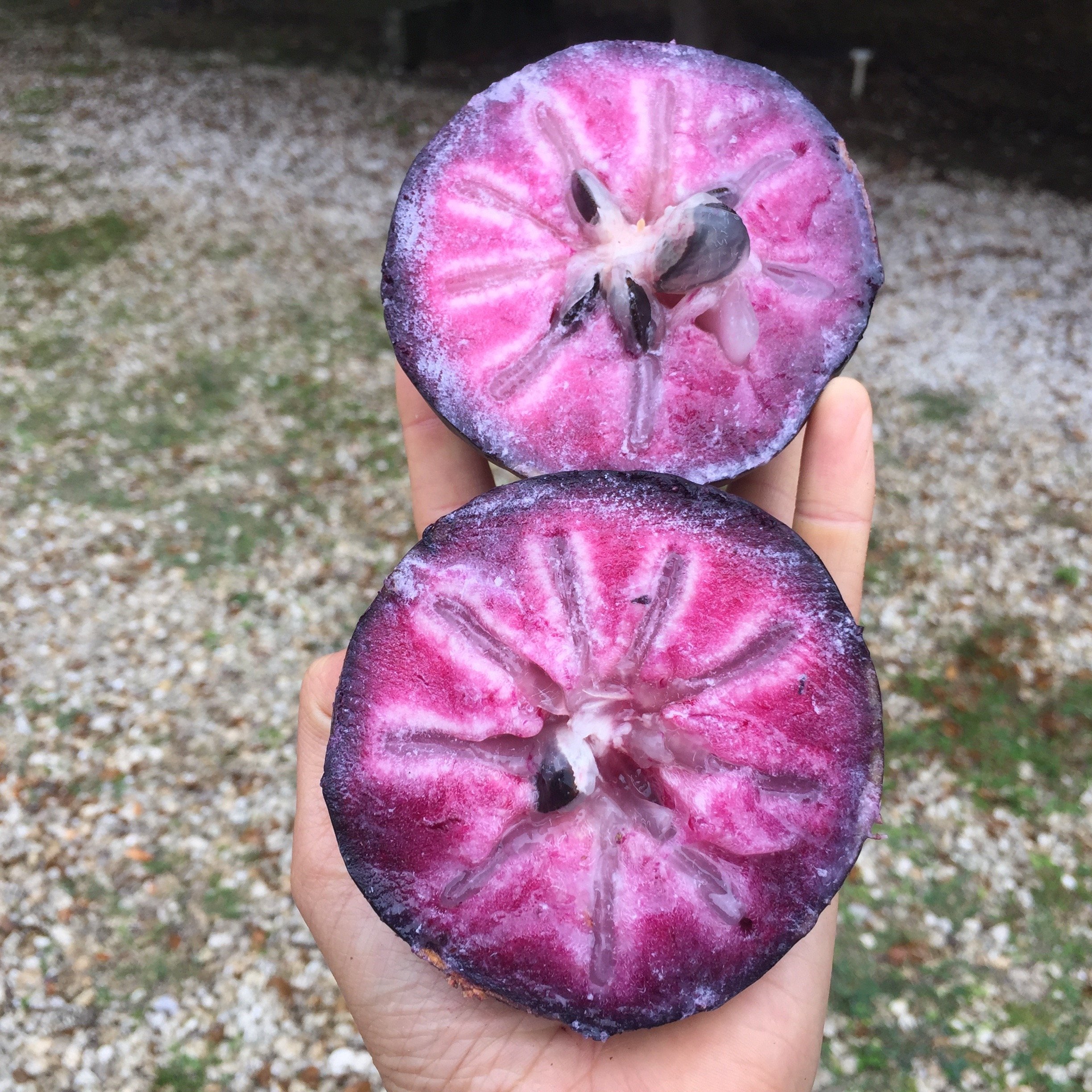 It's the end of April which means star apple season is almost over. 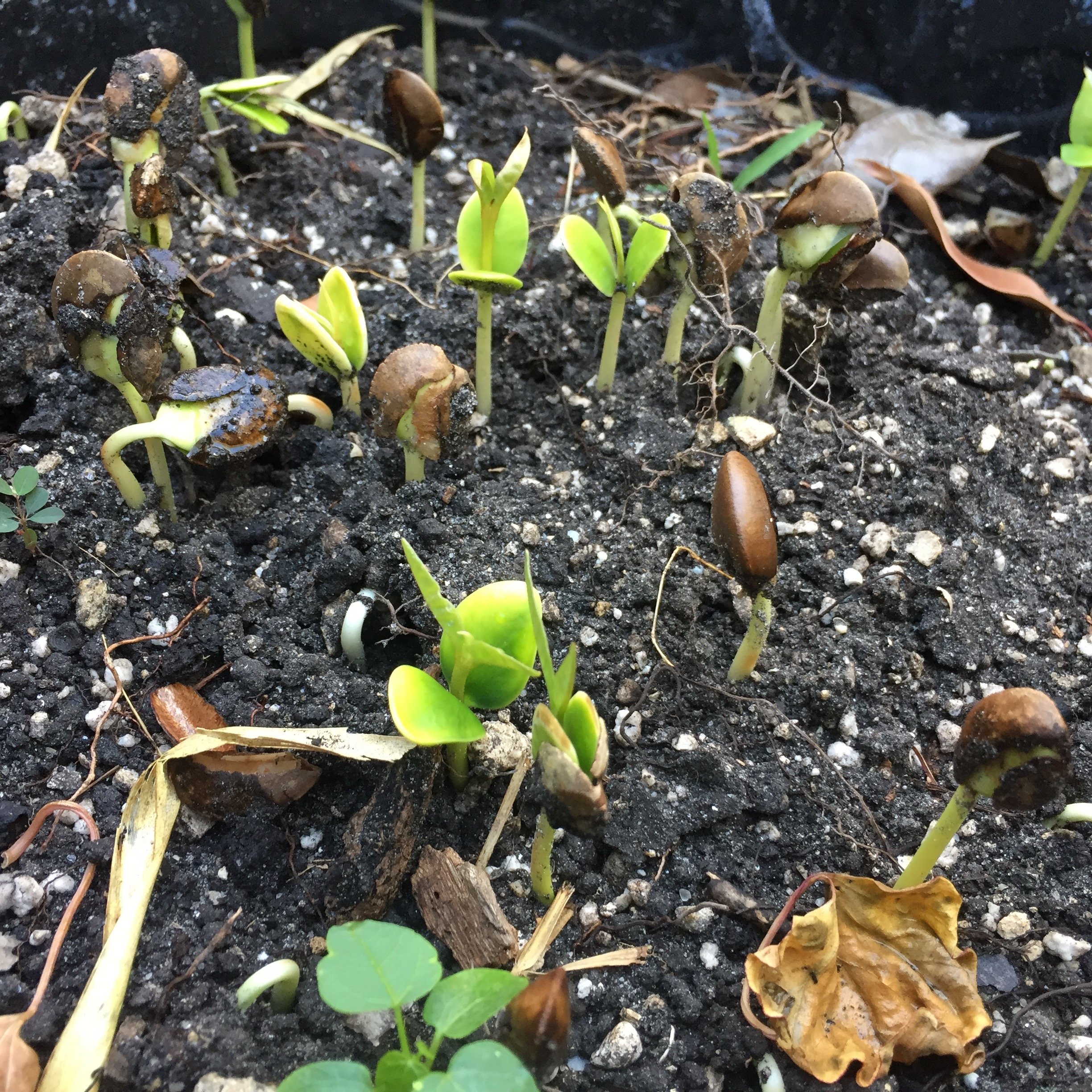 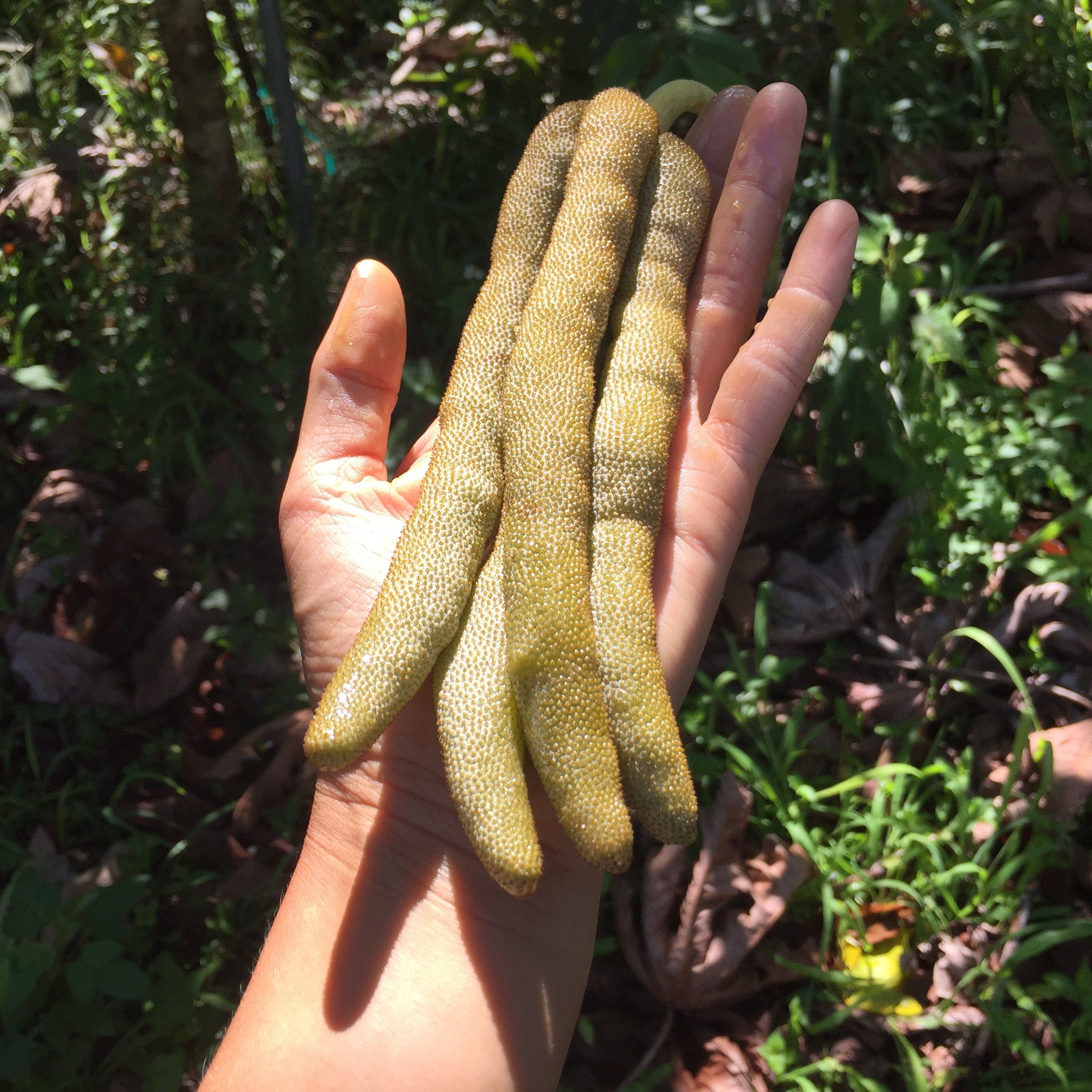 We freeze dried some Cecropia fruits this week. They taste like fruitarian french fries. We only have two packages of 20 grams worth of gummy worm fruits. This fruit is very limited in availability right now. We are curious about how to price this freeze dried fruit. We were thinking about doing an auction style. Email us if you're interested! 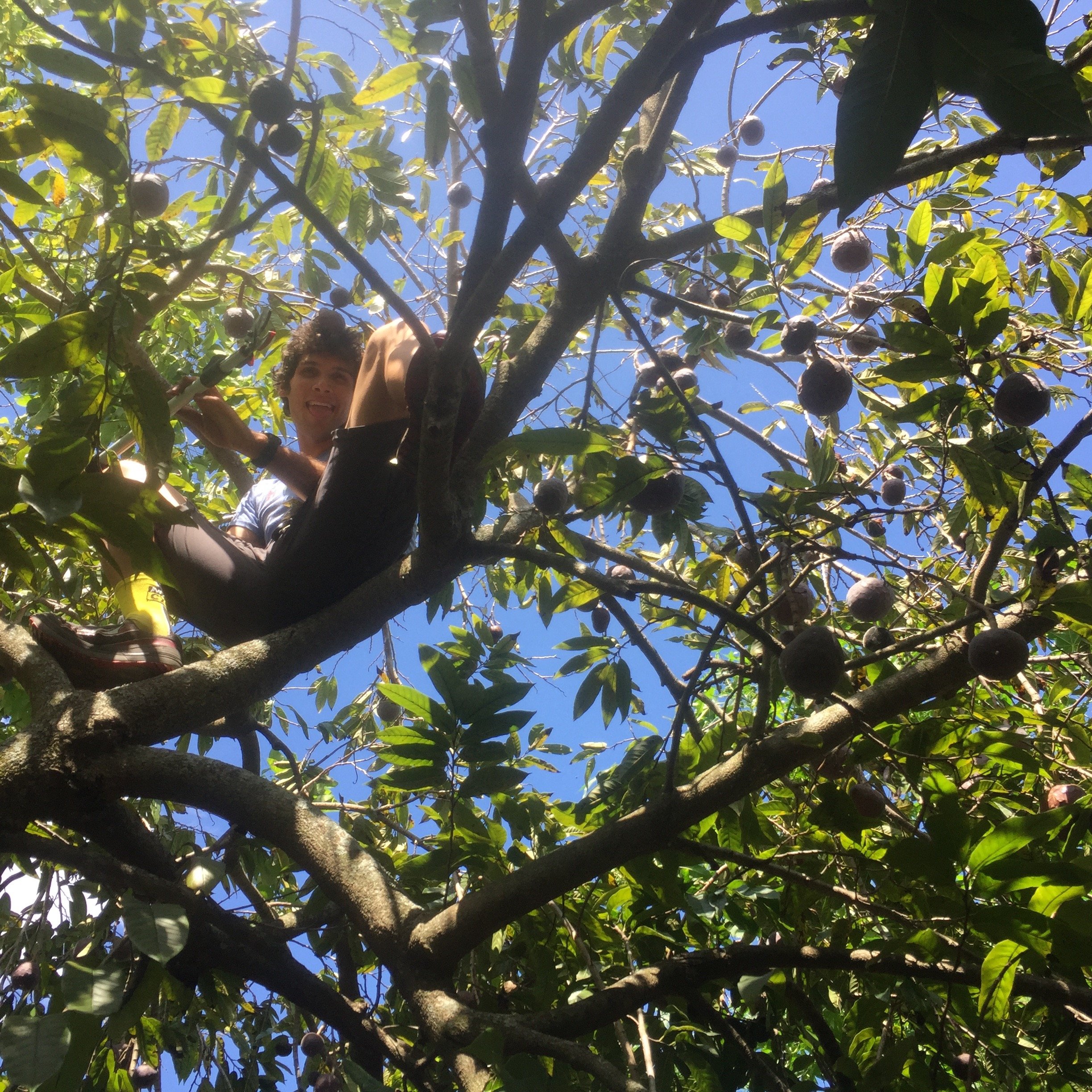 Rane is really a monkey man. He climbs up high in the trees every week picking loads of delicious fruits. We live a dreamy life. 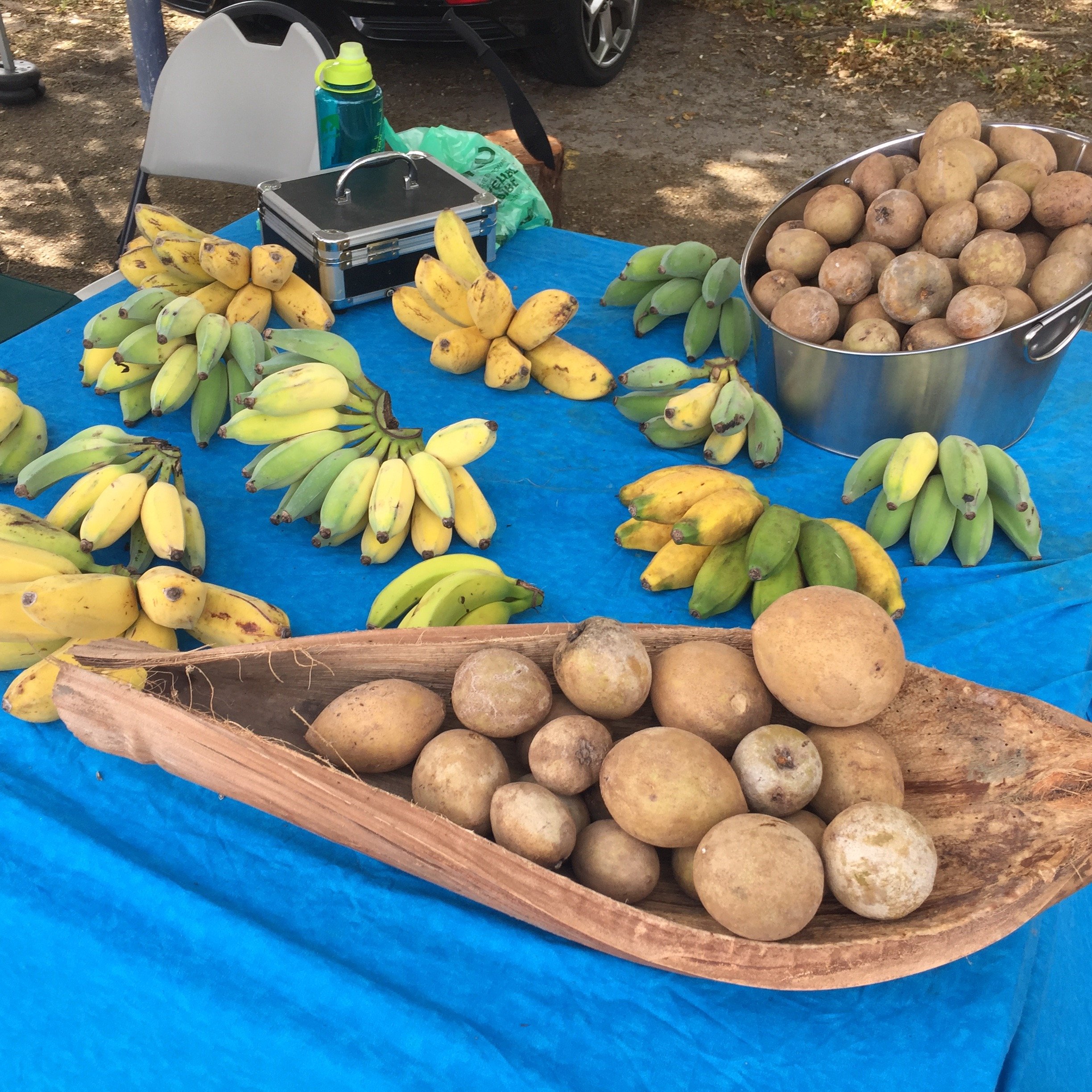 This Saturday come to the SW Community Farmers Market at Tropical Park from 9-3! We should have Mamey, star apple, bananas, sapodilla, and custard apples! We went to an awesome fruit luck on Miami Beach last Sunday. There were so many amazing vegans that we got to connect with and we also spent the day making fruit deliveries around Miami Beach! Email us you'd be interested in fruit deliveries in the Miami Dade area. Bananablondie108 and her kids loved the fruit we delivered! Check out her youtube for yoga tutorials and hilarious vegan rants. One of our favorite youtubers Jake Mace from VeganAthlete made an amazing unboxing and flavor review video of a mamey sapote box. We really appreciate Jake for his enthusiasm to make such amazing content about our fruit! Click here to watch his video. Jake purchased his first box from Miami Fruit over a year ago before we had a website! He made a review video that had an amazing response from his fans. We have been sporadically sponsoring him ever since. We get a lot of emails from people asking for sponsorships, but it is impossible for us to send out free boxes to everyone because we just don't have the money to do that right now. This fruit is very expensive because it is grown here in the USA! Our farmers get paid fair wages. If you are interested in a sponsorship, we recommend buying a box from our website and then creating content with it. If you show us the content you made and we get interest from your followers, then we may be able to discuss a sponsorship. We love our customers so much. If you read through this entire email, we want to give you a special reward. Use the code: MAYOFMAMEY from now until the end of May to get 10% off any size mamey sapote box. Thank you for being AWESOME!